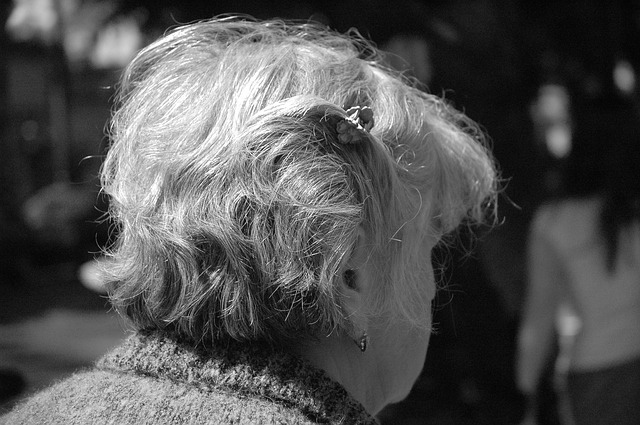 I have come to find there is never a good time to say goodbye – perhaps because words can never describe the feeling of what it means to never see someone again.

I know you forgive my mad ramblings and strange wanderings – so I will share with you since you have asked a few times about my dear friend Mary, the elderly woman who saved me one day from my own despair. As we discovered she was being robbed, a victim of the thief known as Dementia.

The last time I saw her she was confined to a wheelchair – unable to speak it seemed our last connection was a gentle squeeze she gave my hand when I bent down to meet her eyes.

Today as I walked along that leafy street we met on last year I heard a car horn beep then beep again when I hadn’t turned. I looked this time and there behind the wheel was her daughter Belinda as she waved to me to come closer, she indicated to get in to the passenger side – I was reluctant simply because I knew in my heart that this meeting would not carry good news.

But words were stuck, where they get stuck when pain stops our voice and closes our throats, and I watched as a few tears escaped her eyes. I reached out and held her hand and she held it back and we just sat for a few moments.

“Let’s get a coffee” I said and we drove off down the street.

We stopped and got our drinks to go then went to a park not far away and sat under a tall gum tree.

She explained that Mary had a fall and went downhill rapidly, scant details for the end of a full life and I wanted to know more. But now was not the time for me to ask, so I simply sat and listened. It was full of a lot of silence and slow breaths until we had nearly finished our drinks. Then she started to fill in the blanks that made the picture fuller for me to see.

“Mary wasn’t my first mom” she said as I looked back in wonderment – “My birth mom died when I was 8” she added.

As her story unfolded I again realized how little I know about anything or anyone, and how many times in my life I had filled in some ones details before waiting to hear the truth.

It was less than a year after her own mother died that her father married Mary, and it was not a marriage she wanted her father to have – grief has no set timeline and for a daughter so young this was not long enough.

She told me how she tormented Mary for over a decade, never letting her in, never getting close. She told me how she reveled in a strained relationship Mary had with her father and how she hoped everyday Mary would leave, dead or alive.

Her anger went right through to her teenage years and she became pregnant and unwed. Then in the hushed moment of this moment she told me how her father wanted nothing to do with her and wanted her gone, you see he saw her as an embarrassment.

One night she said how she was close to suicide, and sat alone in her room contemplating an early exit when Mary came in to see her. She told me after all the pain she put Mary through, that Mary never sought revenge and only offered compassion – that night in her room Mary sat with her and told her she would not allow her father throw to her out, and vowed to stand with her and help her raise this child.

That night Mary became her mother that she hadn’t had in years and the bonds that only compassion and love can build were created. I sat in amazement and realized what an honor I had been given by befriending my dear friend Mary, even for such a short time.

But that was not the end of the story, you see 25 years passed before Mary sat down again with her to tell her own story. She too became pregnant out of wedlock at a young age, there was no throwing out then and her own father arranged an abortion at a time when abortions were not legal.

Chances are the person who did it had few qualifications and butchered her – Mary was never able to have her own children after that, and her own father treated her as if she was dead anyways.

We sat quietly for a long time after that, I heard Belinda cry as did I – I cannot fathom another’s pain, I can only witness it. But in pain I have come to see there is light, light that shines through when all seems lost.

Belinda named her daughter, that little girl that was born because Mary stepped up to give sanctuary “Mary”.

My dear friend was cremated a few weeks ago but Belinda has been waiting to scatter some of her ashes, she asked me to join her next week.

There are few things in life equal to the honor of saying a last farewell to a dear friend and a great person.

Tonight I will cry and I will mourn my loss and Belinda’s loss too, but perhaps I am seeing that this is not final, that one’s deeds when collected and told can equal eternity – if they were done in the name of love.

I shall write again soon, say hi to Amy, send my love – and if you have a chance maybe say a blessing for Mary.