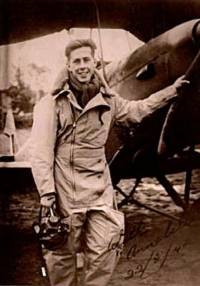 This is Eric Gravenor, my Father – standing on an air strip in England during the war.

He was 19 here, but had enrolled years earlier lying about his age so he could enter service.

He was in the RAF and started as a tail gunner in a Lancaster Bomber. During the war a tail gunner had a life expectancy of 4 missions or two weeks.

As a child I asked about the war, and he would tell his children that they bombed whales and shot at hay bails. Long after his death we found it was so much different. Now when I think of him I cry for the pain and suffering he not only endured, but also witnessed.

No man who served aboard a bomber in the war that wasn’t part of the implicit act of killing others, including innocents – I believe no good man, my father included were able to walk away without a part of their soul killed too. I still wonder if he ever forgave himself.

This is not to say my father did wrong – he knew the fight was right – but dead is dead and gone is gone.

As kids we made toy guns and played War – one night he made my brothers and I sit and watch a movie about war, that had no glory, had no suspense – it was simply about death and suffering in vivid images. I never played war again.

My father spent the last 25 years of his life suffering the pains of the past, pains I shall never know so deep.

To see this picture, gives me pause to realize that he was a much braver man that I have ever been. And that for a time he smiled and laughed at fate.

My Father was British, a gentleman and an officer – I still remember.